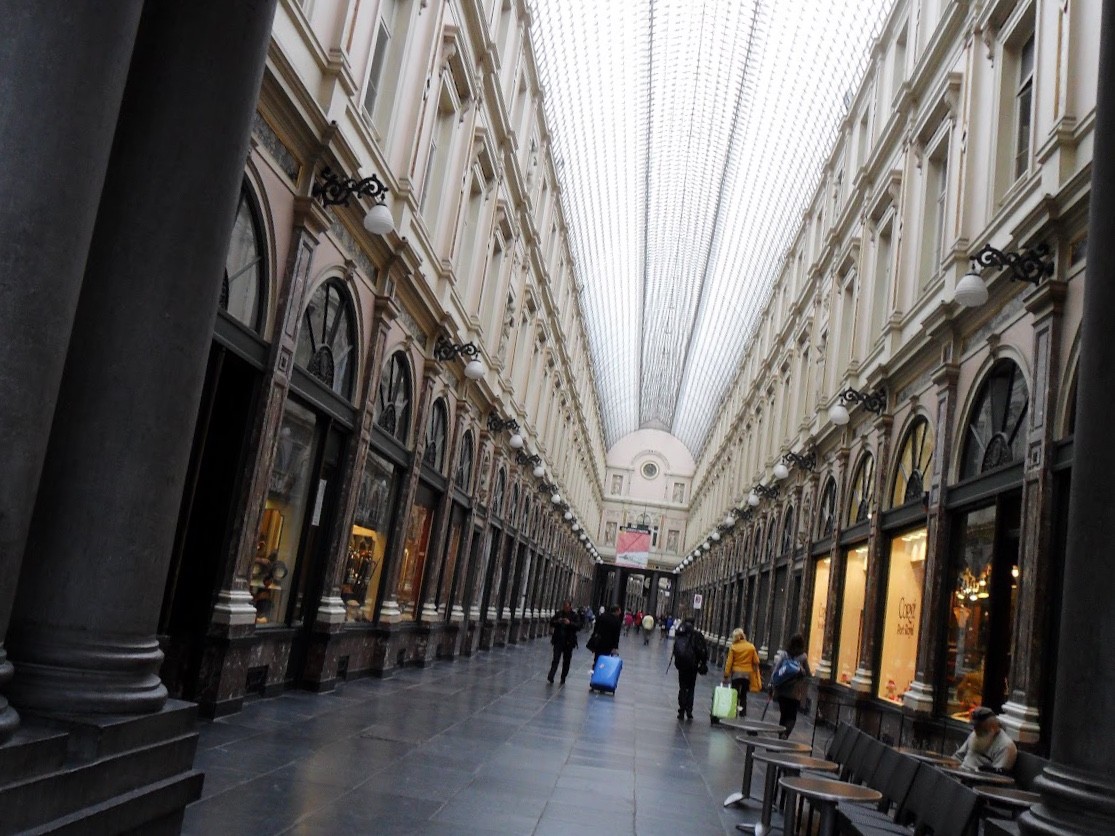 The Royal Gallery of Saint Hubert was designed and built in Brussels in 1830 by Jean-Pierre Külsener, who applied the new knowledge and achievements of the century and created a unique project.

The monumental atrium (glass roof) of the Royal Gallery, a real achievement of the industrial revolution of the early 19th century, was created from new materials - iron and glass. Previously, this was partially used only once, in 1820 in the Gallery of Orleans, built in the Royal Palace in Paris. Instead of a wooden roof frame, the architect proposed a metal frame. Another unusual innovation for that time was glass panels superimposed on each other, like fish scales, so that the ventilation spaces between them prevented any condensation problem.

The gallery was built in the center of Brussels on an area of 40,000 square meters, and is still managed by the descendants of the founding families. The function of a big city is united under the roof of a grandiose building that has completely preserved its atmosphere and traditions. The gallery is famous for organizing festive themed dinners. Tables are installed on both sides of the gallery for its entire length, and guests are dressed in a dress corresponding to the holiday of the era. An unforgettable sight!

One of the last holidays was a grand buffet in honor of the 150th anniversary of Victor Hugo's Les Miserables, similar to the one that was arranged in the year of the successful publication of the book. The gallery, where the writer liked to meet other intellectuals, was chosen for the holiday.
Since 1850, offices and apartments have been rented in the gallery.

Currently, you can rent an apartment in the wing facing Boucher Street and Ekuer Street. The gallery today consists of museums, cinemas, expositions, art galleries, shops of Belgian chocolate, lace and jewelry, fashion boutiques, libraries, bookstores, cafes and restaurants. Objects with a long history stand out from this set.

The Belgian lace manufactory Belge de Dentelles was founded in 1810 and is represented in the Royal Gallery of St. Hubert. Thanks to the traditions accumulated over the centuries and the preserved sources of knowledge of the lace craft, the manufactory produces the most beautiful modern lace. The store offers wedding dresses, fans, monogrammed scarves, tablecloths, shawls, napkins, clothes, lace souvenirs. Lace, which used to adorn the clothes of only wealthy people, has penetrated into modern fashion, turned into home and table decorations.

It is difficult to talk about lace without remembering the rivalry in the art of lace-making between the 16th and 19th centuries, which divided the Belgian Brussels and Bruges with the cities of northern France. In this competition, the Brussels lace manufactory has preserved its own special traditions. The work is still done using traditional techniques manually or using spindles, which sometimes take several months to make. The manufactory shop is located on site No. 14 on the plan of the Queen's Gallery.

"1850" is an antique shop owned by Philippe Nivarle, an enthusiast of antique jewelry and antique business. The store was named after the era when the first stone of the gallery building was laid. Philip became interested in old jewelry from the age of 15, and later studied archaeology and art history. After working in antique houses in Paris, he became an expert in the antique business of the period lasting 100 years, from 1850 to 1950, the most diverse in terms of materials and methods of creating forms. This period contains about ten different styles, from the Napoleonic era and Japanese style to the Art Deco period.

Its motto is: "To provide maximum information about the origin, materials used and methods of creation - this is the work of an antiquarian." The boutique is open from Wednesday to Sunday from 11 to 18 hours and is located at place No. 7 on the plan of the gallery of the King and Princesses.

The Mockafe coffee shop opened back in 1930 and has become an indispensable meeting place in the center of Brussels. Manager Bob Charlier and his son Dorian meet visitors. Initially, it was a small coffee shop where coffee was roasted on the spot. Now it is a real coffee bar with hot drinks, cheese cakes, Brussels waffles, pancakes and gingerbread. Brussels-style coffee is usually served with waffles.

Regular customers with children and grandchildren come here to honor traditions, tourists, famous politicians, celebrities and real Brussels gentlemen with their dogs. The cafe has an old homely atmosphere. The cafe's terrace is used for filming TV shows and movies.

The Dalai Lama was here, Philippe Noiret was filming scenes on the terrace. The series about Commissioner Maigret and Hercule Poirot were filmed here. The cafe is located on site No. 9 on the plan of the gallery of the King and Princesses.

Museum of Letters and Manuscripts

Among them are rare drawings of Dali, made by him in 1946, while working with Walt Disney for the cartoon Destino.
The museum is open daily from 10 to 19 hours, on weekends - from 11 to 18 hours. The day off is Monday. The museum has organized a series of lectures in French and Dutch, which introduces the royal medieval manuscripts. The museum is located on site No. 11 on the plan of the gallery of the King and Princesses.

How to get lost in the gallery

In this small Brussels world, you want to get lost for the whole day. A detailed map of the gallery's attractions will help with this.

Tours about the culture and history of Brussels