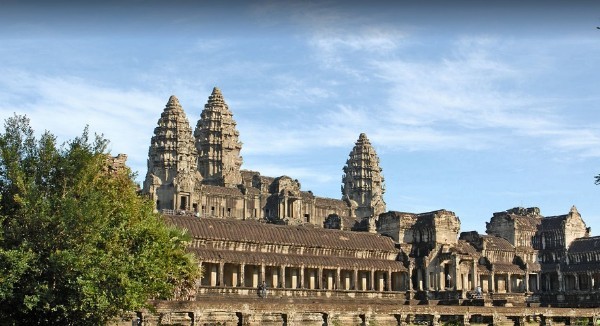 Today, looking at the monumental towers of Angkor in Cambodia, it is hard to imagine that this huge structure was hidden from human eyes for several centuries by an impenetrable wall of the jungle.

Angkor is a city, the ancient capital of the Khmers, which was built in the eighth to twelfth centuries and has not retained its original appearance to this day. There were many wooden buildings in the city, but almost all of them burned down during numerous fires, and some simply rotted away.

Only buildings built of tuff and durable sandstone have survived from the once strong Asian civilization. These treasures include the temple complex, which bears the same name.

The temple complex is located on an area of ​​more than four hundred square kilometers, it includes about a hundred temples and other structures. The most preserved temple called Angkor Wat, which is the largest religious building on the planet. This shrine is dedicated to the god Vishnu. The building is a three-level structure, complemented by five towers, among which the central tower is the tallest, with a total height of fifty-five meters.

The three levels of the building are connected by many passages. Along these levels, galleries are lined, decorated with two-meter bas-reliefs, which depict mythological scenes and scenes from the life of the Khmers. In general, Angkor Wat resembles a huge rectangle surrounded by a moat.

When Angkor Wat was built, they began to build the Bayon (the famous temple-mountain decorated with stone faces), the temples of Banteay Kdei, Ta Prohm and Preah Kan.

After the death of the ruler Jayavaramana the Seventh, the empire began to weaken. Hinduism became the state religion, and the statues of Buddha that adorned Hindu shrines were destroyed. In 1431 Siamese troops conquered Angkor and plundered the city. The locals left the ruined city.

The second life of Angkor began only a century and a half ago. The complex was rediscovered by the French traveler Henri Muo in 1861.