Ruins of the city of Salamis

Home / Greece / Ruins of the city of Salamis 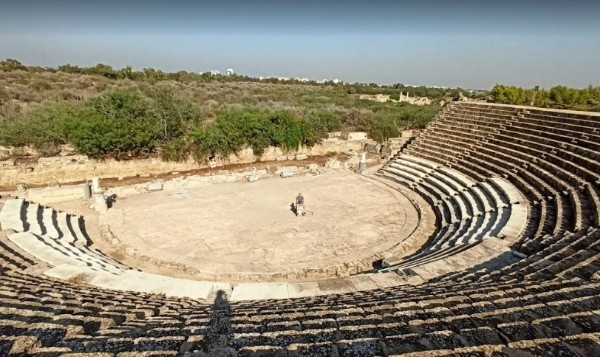 We were not going to Salamis. Having seen enough of the Greek ruins in Turkey, we did not really want to make a stop for the sake of the columns and the next amphitheater. But after driving from Famagusta for about five minutes, our driver stopped and made it clear with gestures that he was turning left, and we were going straight ahead. Here we saw a sign to the right to Salamis, and above the bushes in the distance the tops of white columns were already towering.

"This is destiny!" - We decided and went to look at the next ancient ruins. Guided by the heart and Turkish experience, we did not follow the sign straight.

Proudly skirting the fence, we headed through the bushes and sand dunes to where Dorian columns fluttered enticingly on the horizon. Why detours are never straight - we wandered through the labyrinth of thorn bushes and other thorns long enough until we came straight to the remains of the Roman baths.

The bathhouse has been well preserved. You can see a small pool and stone benches nearby. The pools were once lined with marble patterns. At the baths there are columns and the remains of a street, the floor of a house covered with mosaics. All important structures have been preserved and signed.

Open access everywhere, no fences or barriers, but neat paths for visitors. As in all ancient cities, there is a theater in Salamis - although we, connoisseurs of ancient theaters, did not like it too much: the acoustics are acting up. There are also remnants of a high school. Inside it is also a bath pool. On one of the walls there is a fragment of a fresco, however, compared to ancient art, it looks like a child's drawing or just a bad joke. We then still thought: one of the two, or it is the result of an unsuccessful restoration, or it is the "art" of the early Christians. As it turned out, this is indeed an early Christian fresco.

Nearby are antique statues without heads and hands. As you know, the establishment of a new religion necessarily involves the destruction of the symbols of the old religion. Just as Muslims (and communists, too, by the way) smashed crosses and rubbed the faces of Christian saints on frescoes, so Christians at one time reflected the heads and genitals of antique statues. On the way to the sea we saw the remains of a house where olive oil was made in the 7th century. Near the sea stands a lonely Byzantine basilica of the 6th-7th centuries with a mosaic pattern on the floor and a deep well in the middle.

Sarcophagi remained in the side rooms of the basilica, empty of course. This concludes the review of ancient ruins and we go further to the northeast. We definitely recommend Salamis to visit!