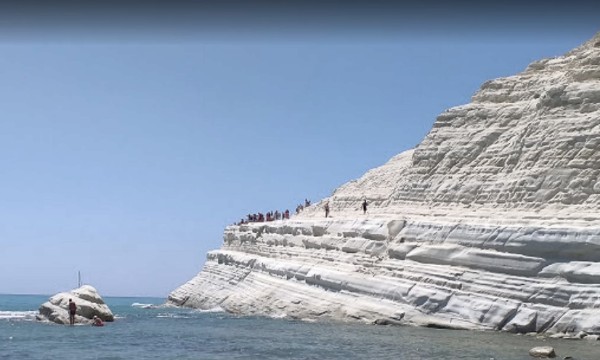 La Scala dei Turchi owes its name to the raids of Saracen pirates, also called "Turks", who landed in this area.

La Scala dei Turchi, located in Realmonte in the province of Agrigento,  Italy, near the Valley of the Temples, is one of the favorite places of the southern summer, thanks to its structure with soft, rounded and irregular lines and the color of the “cold” white marl rock.

It is composed of clayey and limestone sedimentary rocks, which gives the rock its characteristic white color and low temperature to the touch. A path with huge steps leads to the cliff, at the top of which tourists usually “set up camp” to sunbathe or admire the beautiful panorama of the equally charming coast of Agrigento.

Due to a landslide in January 2020, access is currently closed, so it is not possible to visit Scala dei Turchi today.

Lido Scala dei Turchi (about 500 meters from the cliff): it is the closest one, from it there is a staircase going down to the beach. Unfortunately not very accessible.

Lounge Beach Scala dei Turchi (about 800 meters from the cliff): you need to take fewer steps and they are lower, but once you leave the beach, you have to walk more to get to the cliff.

Mayata Beach (about 1 km from the cliff): no steps, but you walk straight along the beach. Access is open. Here you can rent sun loungers and umbrellas, as well as use the services of a bar and a restaurant. Paid parking, showers and toilets.

Valley of the Temples in Agrigento: also visitable in the evening, just 12 km from Scala dei Turchi.

You can stay a stone's throw from the picturesque Scala dei Turchi with an all-inclusive package suitable for families, couples and organized groups.

It is quite difficult to get to it, going up and down the cliff can be dangerous due to the strong slipperiness of some points.

In addition to a swimsuit, sunscreen and a hat, comfortable shoes are recommended. Despite security measures, the beach in front of the cliff continues to deteriorate, so on some days it may happen that it will be closed.