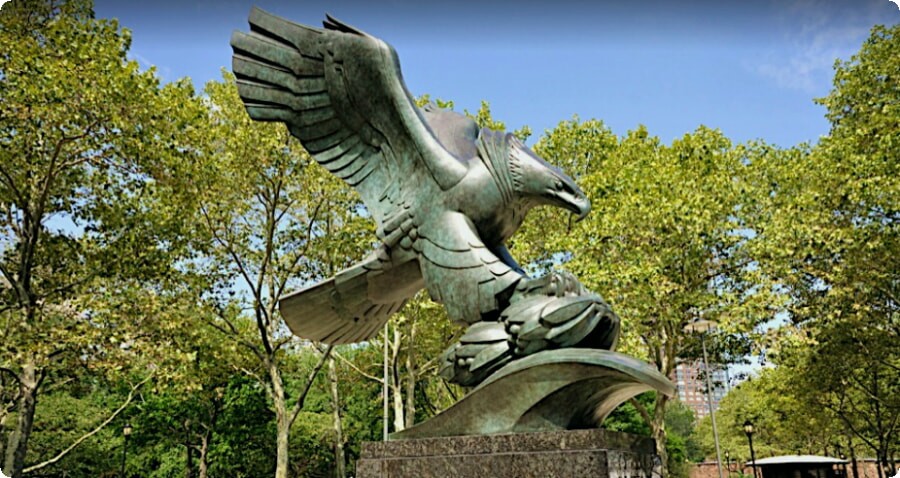 This is the New York of 1930s black-and-white films: narrow streets, skyscrapers soaring in the sky, energetic businessmen, Cary Grant and taxi drivers with a unique New York accent. These days, of course, most NYC taxi drivers are from Bangladesh, but the rest is the same, except for Cary Grant.

The Dutch colony of New Amsterdam was founded on this site in the 1620s, and in 1626 its governor, Peter Minuit, made a legendary deal - he bought the island of Manhattan from the Indians for $ 24. The borders of the plot he bought almost reached the current Bowling Green - a small triangular park at the very beginning of Broadway. Battery Park at the southern tip of Manhattan offers amazing views of New York Harbor. Tour ferries depart from here to two of America's greatest symbols: the Statue of Liberty and Ellis Island.

The Statue of Liberty (whose official name is "Liberty Illuminating the World") was created by the French sculptor Frederic Augustus Bartholdi and engineer Alexander Gustave Eiffel and presented by the people of France in 1886 as a symbol of friendship and commitment of the two countries to the ideals of freedom. On October 28, 1886, the statue was installed on a granite pedestal on Bedlo Island (now Liberty Island); By the centenary of the statue, a lot of work was done to restore it.

To the north of Liberty Island there is Ellis Island - the main center for receiving immigrants in the United States, through which from 1892 to 1954. passed about 12 million people. Today, about 40% of Americans are descendants of those who passed through this island. In the 1980s the island was reconstructed, turning it into a memorial and museum center. And those who are not interested in monuments, but who are eager to enjoy the views of Liberty and Manhattan, can take one of the Staten Island Ferry, which runs every half an hour between New York and its sea suburbs.

Head back to Manhattan to hear the loud heartbeat of "big money" from the legendary Wall Street in the maze of streets north of Battery Park. Named after the wall that the Dutch built to keep out the Indians, this street has been the commercial center of New York for more than two centuries. The New York Stock Exchange, housed in a beautiful building designed by George Post in 1903, is the world's largest stock market.

Wall Street is also home to Trinity Church, once the tallest building in New York (85 m). Built in 1846 by William Upjohn, the Episcopal Church, which today is almost invisible behind the surrounding buildings, still functions in its original capacity.

Five blocks north there is St. Paul's Chapel; Erected in 1766, this Georgian chapel is New York's only church building from colonial times. Many historical figures of the 18th and early 19th centuries are buried in its cemetery. George Washington prayed in this chapel after his inauguration in 1789, but it became especially famous after September 11, 2001, when it housed the headquarters for helping people employed in the restoration work.

In the days following the terrorist attack, the chapel's iron fence was littered with notes, photographs of the missing, firefighters' helmets, baseball caps, flags, paper cranes (symbolizing peace) and other items commemorating the more than 2,500 people who died under the rubble of the World Trade center.

Moving up Broadway, you will pass the Woolworth Building, the tallest building in the world in 1913 and still one of the most beautiful buildings in New York. Designed in the neo-Gothic style by Cass Gilbert, it resembles the extremely tall and narrow Notre Dame Cathedral with an abundance of architectural decorations in the form of stone patterns, gargoyles, turrets and spiers. The building is closed to the general public, but you can look into its temple-like lobby.

Crossing the street, you will find yourself at the southern end of the restored City Hall Park, a public space surrounded by City Hall buildings: the amazingly small City Hall, the majestic Archives Building, the huge City Hall and the Tweed Courthouse built during the reign of the legendary politician William " Boss" Tweed.

The $250,000 city budget for this building ended up costing the taxpayers $14 million, of which Tweed and his cronies are said to have pocketed over 60%.